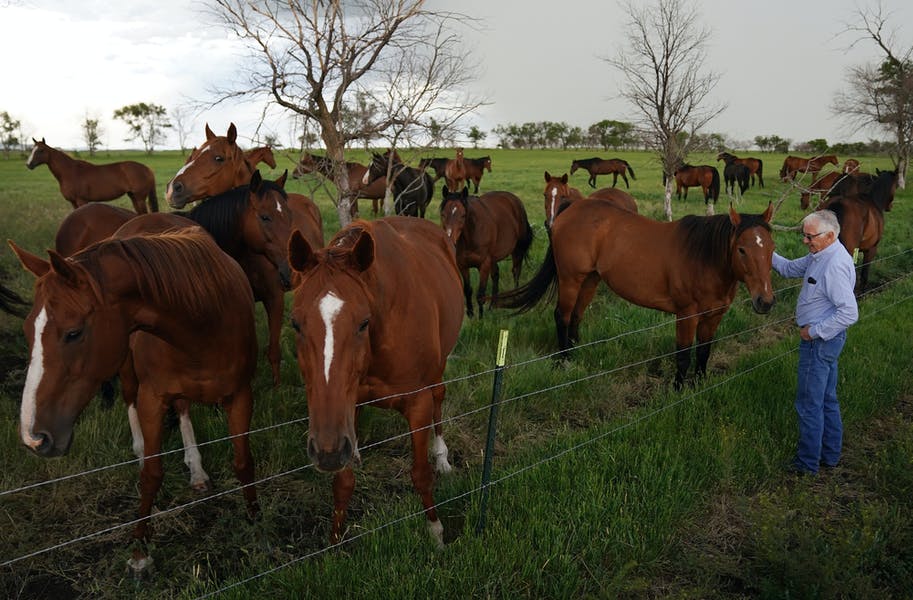 From an article in the Star Tribune
https://www.startribune.com/canterbury-park-veterinarian-s-mission-is-to-save-horses-from-slaughter/572348402/#1

​SLOPE COUNTY, N.D.
He doesn't remember the exact year. It was probably 1998, or maybe 1999, when a horse trainer at Canterbury Park first asked the question.
Bowman, can you find a home for this horse?

"You think about what can happen to them," Dr. Richard Bowman says, as he guides his pickup over a rust-colored ribbon of gravel road. "They might get put down, or sent to slaughter. I wouldn't have felt good about saying no."

Two decades later, the 71-year-old veterinarian still can't walk away from a horse in need. His 4,000-acre cattle ranch in North Dakota has become a refuge for the injured, the old, the lame and the slow, the horses with nowhere to go when they retire from racing at Canterbury Park in Shakopee. More than 600 thoroughbreds and quarter horses have been healed and rejuvenated in the prairie air, eventually moving on to new owners and careers. Those too infirm to be adopted remain in Bowman's care, living out their days in lush fields inside the Little Missouri National Grassland.
Before he and others stepped up to re-home them, Bowman says, the bulk of former Minnesota racehorses were sent to their deaths in Canadian or Mexican slaughterhouses. Though multiple rescue groups now help out, Bowman Second Chance Thoroughbred Adoption is famous for welcoming every horse in any condition.

"The word 'no' is not in his vocabulary," says Dr. Lynn Hovda, chief veterinarian for the Minnesota Racing Commission. "I don't know anyone who opens their doors like Bowman does. He's got a heart as big as Texas."

Tucked in the southwest corner of North Dakota, the ranch is blanketed in a sea of knee-deep grass, shared by antelope and white-tailed deer. It is a place of peace and respite, for the horses and the doctor.

Bowman often makes the nine-hour drive home on the days he isn't working at Canterbury Park. The gravel road leads to the east pasture, where 35 longtime residents interrupt their grazing when they hear his truck rumbling across the field. They gallop to the fence line, a stream of brown and copper and black, leaning over the barbed wire and jostling for Bowman's attention.

He points out Green Lemon, a winner of $103,000 before bad feet ended his racing days. Buck James, a striking dark brown gelding with a pronounced limp. And Lumpsinmyoatmeal — now, just Lumpy — a Canterbury stakes champion angling for a pat on the neck.
"I just like coming out here and hanging out with them," Bowman says. "And the ones that get adopted, it's pretty emotional to see the bonds they make with their new owners. It just makes you feel good."

The ranch has that effect on a lot of people. Mac Robertson, Canterbury's all-time leading trainer, has sent about 40 horses to Bowman, including Lumpy. Some might have been euthanized because of their injuries. Robertson wasn't ready to give up on them, and he knew Bowman wouldn't, either.
"He is the last hope for a lot of these horses," Robertson says. "I race all over the country, and there is no one, anywhere, like Bowman. He's an amazing man. He loves the ones no one else wants."

Becoming horses again
As Minnesota Racing Commission veterinarians, Bowman, Hovda and Dr. Christy Klatt ensure the horses at the state's racetracks are healthy and sound. It's a dream job for a man who "raced for ham sandwiches" in his youth, riding the family horses at local rodeos and county fairs.
The three work together to find homes for about 60 racehorses each year. Hovda also combs the barns for other critters left behind when the racing season ends at Canterbury and Running Aces harness track in Columbus. Friends at local animal shelters have helped her place cats, chickens, rabbits and the occasional peacock.

"We have a whole village of people who work with us," Hovda says. "We make sure everyone gets taken care of."
Some horses are adopted directly from the track through the vets' regional network of horsemen and women. A few in need of temporary quarters go to Hovda's 20-acre farm near Loretto. Most make the 624-mile journey west, to the land Bowman's father purchased in 1945.
The ranch housed 93 horses last summer, in a county with a population of only 727 people. The rustic surroundings require some getting used to for these pampered, high-strung animals. After spending most of their lives in box stalls, with grooms tending to their every need, they must adapt to living outdoors within a herd. Their aluminum racing shoes come off. They eat hay and grass instead of premium grain. No more daily baths; they can roll in dirt and mud, while their sun-bleached manes grow long and wild.

"They have to learn to just be a horse again," Bowman says. "We keep them confined in smaller units at first, because they will run off.

"They have to learn to stay out of the barbed wire. They have to get accustomed to being with other horses and find their place in the pecking order. Over time, they figure it out."

No horse needs to be in a hurry. Bowman treats them with what he calls "the tincture of time," giving them as long as it takes to restore their bodies and minds.

Significant injuries to tendons, ligaments and bones can heal with a year or more of rest. The average stay is two years, though horses rescued from dire situations may need more time to become whole. In addition to the racehorses they get directly from trainers, the veterinarians team with Canterbury Park officials to rescue two or three per year from "kill pens''— where horses are held before being auctioned for slaughter — as far away as Texas and Maryland.

Though Canterbury Park prohibits owners from selling horses for slaughter, even one placed in a carefully chosen home can be resold and end up in a kill pen. A Michigan rescuer found Tubby Time, the track's horse of the year in 2011, emaciated and terrified at a slaughter auction in 2015.
"That's a big worry, that your horse will end up like that," says Barry Butzow, a longtime racehorse owner from Eden Prairie. "We owe a lot to these horses. That's why it's so important to have someone like Bowman doing what he does."

For years, Bowman bore nearly all the expense. It costs $1,000 per year to care for a single horse, he says, including transportation, regular hoof trims, hay and medical care. The herd went through 4,500 pounds of hay per day last summer.

Butzow eventually helped him set up a 501(c)3 charity. That enabled Canterbury Park to raise money by assessing fees on race entries and horse purchases, then matching the funds. Bowman Second Chance Thoroughbred Adoption also receives grants, including a $40,000 contribution from the Minnesota Racing Commission in 2019, along with donations from horse owners like Butzow.

Bowman is especially touched by the checks that show up unexpectedly. A woman from South Carolina sends $5,000 every year, and little girls have mailed him their birthday money.

"There are people who would give their last dollar to save these horses," Bowman says. "Sometimes, it just blows me away." 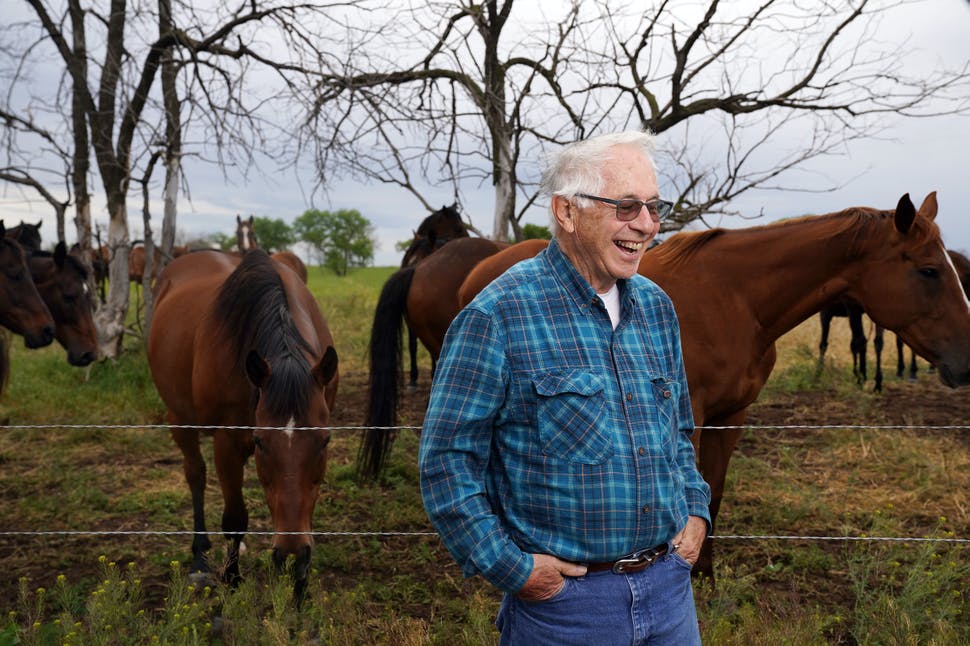 Matchmaking
Nothing moves Bowman as deeply as seeing a prospective owner fall in love with one of his horses. A few years ago, Andrea Keacher, owner of Boulder Pointe Equestrian and Event Center in Anoka County, held a horse show just for Bowman.

"We wanted to honor him and show him where his horses had gone and what they were doing," Keacher says. "Our students wrote letters telling him what the horses meant to them. He was so thrilled."

With the help of Anne Johnson, who manages the website and paperwork for the nonprofit, Bowman tries to match horses with the perfect new owners and careers. They observe each horse from the moment it arrives at the ranch, assessing its skills and personality.

At least 50 Bowman thoroughbreds have come through Keacher's stable, finding new work as hunter/jumpers, dressage and eventing horses and polo ponies. The gentlest become mounts for her riding students.

"These horses have huge hearts, and they will try their best for you," Keacher says.

Bowman's horses find homes all over the United States, with most landing in Minnesota and Wisconsin. They do everything from trail riding to herding cattle to police work. One of Bowman's favorite stories is the woman who adopted a horse just to ride to her mailbox every day.

Cre Larson and her son, Dalton, visited the ranch in late June to look for a barrel racing prospect. Larson, of Deer River, Minn., had already told Johnson what her daughter, Danielle, was looking for: a horse with muscular hindquarters, nimble feet and "a little sass."

Johnson picked out six that fit the description. Cre Larson swooned over The Tex Mex Is Cool, an elegant chestnut mare, and Your Just Jesse, a fiery quarter horse. Dalton had his eye on Land of Oz, a towering dark brown gelding. After a few hours, Larson — whose T-shirt read "My horses eat my paychecks" — wrote a check for three horses, then called later and bought one more.

Danielle returned in two weeks to pick them up. As soon as the horses stepped off the trailer, they settled into their new home.
"We weren't sure about Jesse, because he had a knee injury in the past," Cre Larson says. "But if his new job is just being a pasture statue, that's OK. He's part of our family now.

"Dr. Bowman understands the spirit of these horses. He knows they all have a purpose. You just have to find it. His place was like heaven to me, and he's their guardian angel."

Seven other horses were adopted that same weekend, thinning the herd just a bit. On his way out of town, Bowman stopped at the east pasture, where Lumpy, Lemon and Buck were waiting for him.

The doctor said his goodbyes, then hit the road for the long drive back to Shakopee. He had been back at work for less than a week when Hovda noticed a note on his desk, with a list of names. She didn't have to read it to know what it asked.

Bowman, can you find a home for this horse?

She already knew the answer, and so did he. It was the same as it was the first time, and every time since.
​
"I really believe the thoroughbred is the most beautiful creature ever invented," Bowman says. "To give them a second chance, it just makes my heart feel good. And if the horses are happy, and the people who get them are happy, that's the greatest thing I can think of." 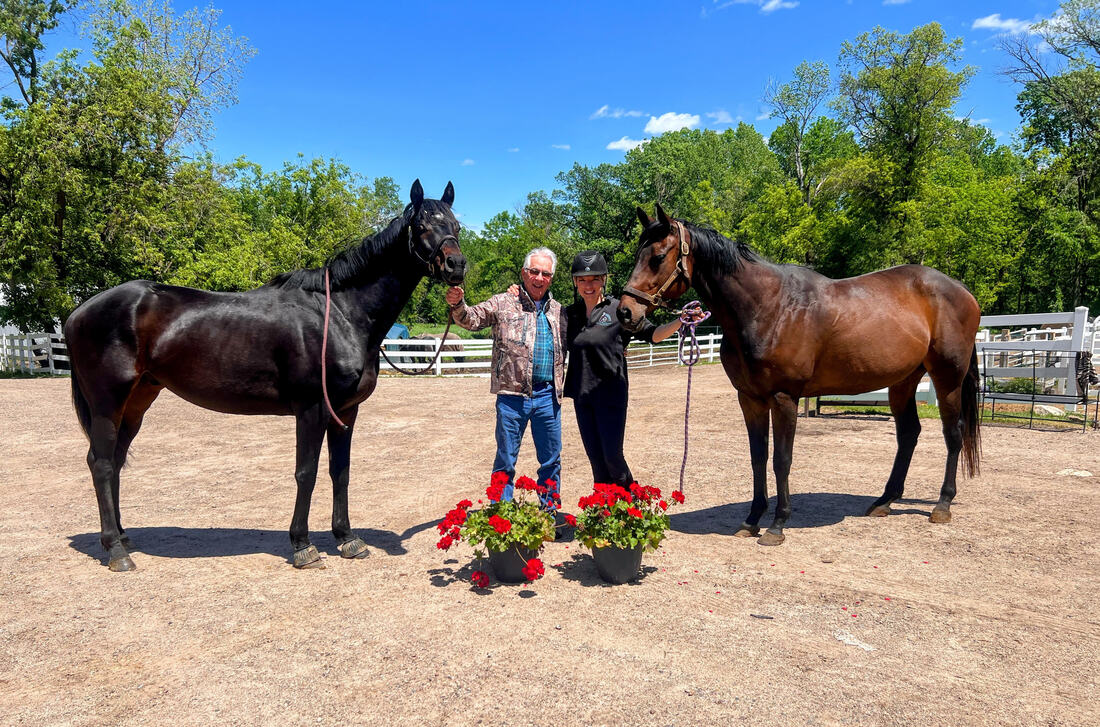 Transition
In March 2022 Dr. Bowman sold his land in North Dakota and entered a version of retirement although he has maintained his position with the MN Racing Commission working at the track at Canterbury Park in Shakopee, MN.  This change required a new home for the organization that carries his name and he called his long time friend in the thoroughbred rescue business, Andrea Keacher (now Gustafson).

Dr. Bowman has known Andrea for over 20 years, they met well before she had her own horse business and successful record of rescuing OTTB horses.  Andrea started Boulder Pointe Equestrian & Event Center, LLC in 2013 but has been training horses and teaching riders since she was 16.

Andrea jumped at the opportunity to expand her rescue efforts by officially hosting the organization on a portion of her farm in Nowthen, MN.